The Restaurant Business That Changed the World: Leavenworth, WA

Tough to believe a little restaurant business in the middle of nowhere could change the world... but it did.  Two million people a year visit the little town of Leavenworth, WA each year.  No, there is no sandy ocean beaches, there is not one of the wonders of the world.   In Eastern Washington, Leavenworth has a population of 2,206, and is located in Washington's Chelan county, about 71.8 miles from Bellevue and 77.9 miles from Seattle.  Do the numbers add up?  Don't seem to...Does not seem possible.

Ted Price and Bob Rodgers had a vision.  They owned a little restaurant and motel 20 miles outside of Leavenworth, and it was because of this vision that Leavenworth's transformation was possible.  You can read the full story in the book "Miracle Town".   It tells the complete story of how this economically depressed mountain logging town became a beautiful and prosperous Bavarian village.  Year after year over two million visitors come to enjoy its Old World architecture, seasonal festivals, music, dance, recreation activities, authentic food, beautiful Waterfront Park promenade—and its very hospitable people.  As you read the book and the history, you will read about how the town had inner turmoil and the money had stopped flowing because of the changes within the logging industry.  Their town was depressed and it appeared there was no hope. There was talk of closing the high school as the funding was voted down again and again.  There was no hope.   There were challenges .. big ones.  Ted and Bob were outsiders and the town had no money.  There was no traffic on the mountain pass road since I-90 seemed to be the preferred choice.  Eastern Washington is farm country so the population was scarce.  They created the future by having a vision, communicating, working hard... reaching out, collaborating, and in time, overcame the resistance and made believers of the community.

From LeavenworthHistory.com: "Major remodeling of Leavenworth meant most building owners would have to borrow money, without their being able to provide much security. There wasn't any professional help, nor were government funds available. Most owners would have to make severe sacrifices and risk everything." " ... Undaunted, Ted became active in the affairs of nearby Leavenworth, then suffering a severe economic depression. To save their town, under the guidance of the University of Washington, the Leavenworth townspeople had undertaken an extensive self-help study project, called LIFE — Leavenworth Improvement For Everyone. Ted joined with others and, in 1963 he proposed, and became chairman of, the LIFE Tourism Committee. For more information on Project LIFE click here. The University of Washington had never considered tourism as a committee, but they agreed to endorse his committee. ..... read more at LeavenworthHistory.com.

The website and book go on to tell the story of how others joined in the vision (can't do much alone) and how the combined force pulled them through to be more than what anyone would believe is possible.

My Dad and Mom would take us to Leavenworth when I was young in the late 60's and early 70's. (There I go again...talking about Dad and Mom...Mom will want to be first) :)   It did stand out as unique and today even more so.

What is it you are hoping to do with your restaurant business?  If you do not believe you can make a difference then you won't.

I have been in the situation where things are dire, there is no money and the theme is "desperation".   Turning the tide in restaurants started with me and my team.  To believe it can be done...that is a big hump.  I believe in the possibilities that exist in a team when there is synergy, support, leadership, trust, communication...and empower people to be the best at what they do.  A little restaurant and small motel helped to change the world as it is a destination for people to visit and experience from all over the globe.  Sure they had help.  You can have help too....there are more services available now than ever before.   We visited Leavenworth again this last week-end. Live music, amazing food and quality abound.  There was little that was typical as we went store to store and restaurant to restaurant.   Enjoy the photos (borrowed a few from LeavenworthHistory.com so you could see my current photos vs. photos of old.   To help you get over this hump...here again is the book and link to LeavenworthHistory.com.  What do you believe?

I would prefer you read this book and vs. reading anything I have to say...then come back in a month to tell me what you think.  If you say...but that was then, now is now... let me know what barriers you have. 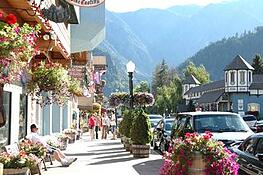 How about you?  How will your business and vision change the world?