Diffusion of Innovations - Who buys your products, why and when

The discussion about predicting human behavior as to how and when people buy is often diverted to the Diffusion of Innovations.

Diffusion of Innovations is a theory that seeks to explain how, why, and at what rate new ideas and technology spread through cultures.  How and when people buy products or services is thought to be affected by this theory. Everett Rogers, a professor of rural sociology, popularized the theory in his 1962 book Diffusion of Innovations.

Everett Rogers said diffusion is the process by which an innovation is communicated through certain channels over time among the members of a social system.

The origins of the diffusion of innovations theory are varied and span multiple disciplines.

Rogers advocated the theory that there are four main elements that influence the spread of a new idea:

This process relies heavily on human capital. The innovation must be widely adopted in order to self-sustain. Within the rate of adoption, there is a point at which an innovation reaches critical mass.

The categories of adopters are:

Diffusion of Innovations manifests itself in different ways in various cultures and fields and is highly subjective to the type of adopters and innovation-decision process. The diffusion of innovations according to Rogers. With successive groups of consumers adopting the new technology (shown in blue), its market share (yellow) will eventually reach the saturation level. To put it into perspective, here is another way to look at the chart: In 2010 more people are considered outside normal.

To better understand the theory and how to sell more products or services with innovators or laggards in mind, you will turn to these two books: 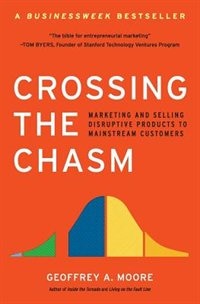 Author Geoffrey Moore makes the case that high-tech products require marketing strategies that differ from those in other industries. His chasm theory describes how high-tech products initially sell well, mainly to a technically literate customer base, but then hit a lull as marketing professionals try to cross the chasm to mainstream buyers. This pattern, says Moore, is unique to the high-tech industry. We Are All Weird: The Myth of Mass and The End of Compliance

We Are All Weird is a celebration of choice, of treating different people differently and of embracing the notion that everyone deserves the dignity and respect that comes from being heard. The book calls for end of mass and for the beginning of offering people more choices, more interests and giving them more authority to operate in ways that reflect their own unique values.

Seth Godin has identified a new era of weirdness that is upon us. People with more choices, more interests and the power to do something about it are stepping forward and insisting that the world work in a different way. By enabling choice we allow people to survive and thrive.

Diffusion of Innovations Theory is probably good as a descriptive tool but there are more questions yet to be answered.  Humans behavior can't be predicted with mathematics and charts but you fill find it helpful for providing guidance as to how to accelerate the rate of adoption.  Many of its elements may be specific to the culture in which it was derived (North America in the 1950s and 60s) and less relevant in, for example, East Asian and African countries, and as time goes on.

Most important for any small business owner or entrepreneur:  If your business is cutting edge or a very unusual idea, a majority of people will say:  "No thank you, I'll wait."  The good news is that those who are interested will form a line, pay more and even brag about the product.