New Hampshire Beer Consumption Highest in US at 32 Gallons Annually

A successful business owner who relies on guerrilla marketing listens first.  Restaurants are no exception.  If your restaurant is in New Hampshire, pay attention to the Beer Institute's Brewer Almanac.  In this special report (which is in essence a spreadsheet) you will learn that the highest consumption of beer per capita is in New Hampshire at about 32 gallons annually and is twice that of the lowest in Utah.

If your restaurant is located in New Hampshire and not selling beer, think again.

#2 behind New Hampshire is Montana followed by North Dakota, South Dakota and #5 is Nevada.

If there is such a passion for beer, is the next step to offer beer flavored breath mints, beer in pies, beer pancake batter?  Would beer become a more standard ingredient for mixes?

The successful guerrilla marketer knows that to be successful, listening to the community is imperitive.  While the current guest's comments are the best resource, maybe they wouldn't want to admit to: "Yes!  I drink over 32 gallons of beer each year.  I love beer, beer, beer.  If you have food with beer in the recipe, I would be happy."  This would be a personal secret.  This will have you relying on the statistical reports or your own menu mix analysis to make decisions.

The report shows Utah having the lowest per capita of beer consumption.  (Is this a surprise?) 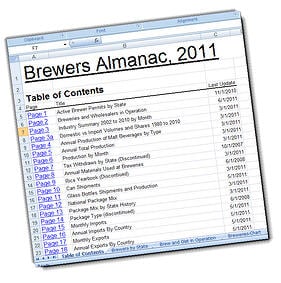