Hitting a YouTube Homerun - 4 Tips to Go Viral with Video 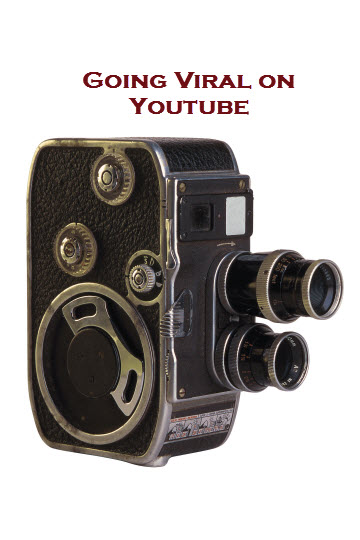 It is possible to go viral with a video on Youtube and with the tips below, the chance of your video going viral will improve.  There's much to be learned from a media landscape where TV is now relying on the Internet for content. On Comedy Central's hit program 'Tosh.0,' host Daniel Tosh fills a half-hour by showing the week's best Internet video clips. Although TV may trump Internet video in worldwide viewers (1.2 billion people watched online video in 2011), it's no longer the most cost-effective means of conveying a message through video.

With the rise of YouTube and other free video hosting platforms, you can potentially generate thousands of impressions without ever having to pay for a broadcast. However, there is a real difference between a promotional video that goes viral and a run-of-the-mill advertisement that struggles to receive a thousand views.

Producing a video for the internet is considerably easier than television. Without specific time, size, and formatting restraints, amateur producers can often create a viable video with a fraction of the time and resources once required. On YouTube there are no legal contracts to negotiate or any of the complex preparation that's associated with television ads. And, of course, it's free!

As a case study, let's take a look at the recent YouTube ad campaigns by Old Spice Deodorant.  In a year's span, Old Spice has garnered millions of unsolicited views by simply creating unique and humorous ads that people are likely to share. Old Spice took a previous television ad-campaign featuring a bare-chested, deep-voiced, over-the-top ladies' man and published it on YouTube, where it has become immensely popular.

Noting that campaign's success online, Old Spice has since released videos on a weekly basis, using just about every gimmick possible to keep the content unique and entertaining. To keep viewers coming back, Old Spice will employ washed-up sports stars for less-than-dignified cameos, or feature quirky new words like 'Smellf,' which are utterly ridiculous, yet clever enough to be funny at the same.

Old Spice clearly hit a home run with this campaign, which can generate a million views for a new video in just a few days' time. In old-school TV terms, that's prime time coverage for 3 a.m. ad placement costs. By releasing videos with consistently funny content at regular intervals, repeat viewers are lured back and first-timers are sucked into the channel as more Old Spice videos pop-up with millions of views. The sheer number of interesting videos with high view-counts creates an environment that keeps customers on the channel for an extended time, demonstrating the high marketing potential for the YouTube platform.

So, want to be the next Old Spice on YouTube? When creating videos for your business, start with these pointers to make your content as effective as possible:

Build your video for your clients, not your personal preferences. Know your target demographic and create videos to suit them. You may need to consider age, sex, regional nuances, comedic sensibilities and hobbies. Not every potential client will appreciate an outrageous or shocking viral video that features potentially offensive content. On the other hand, if you are marketing to a younger or more nightlife-based audience, a risqué video might be just what you need.

Ultimately, capturing raw emotion is what motivates people to share a video. Memorable videos have one thing in common -- they garner a reaction. Whether it's happiness, sadness, shock, or thrill, encapsulating raw emotion is a certain way to make sure that people react to your video (and, hopefully, share it). No one remembers a boring 30-second advertisement with customer testimonials, but viewers will remember a penguin soaring across a canyon on a motorcycle in flames. Don't be afraid to push the envelope a little bit if you really want to create something viral.

Be as unique as possible with your video concept. Take the time to brainstorm a concept for a video series that could potentially provide multiple continuous videos using similar formats, with the intention of bringing viewers back week after week. Set yourself apart from your competition by doing something that no one would expect from your brand. Hire a ridiculous actor, plan a humorous stunt or practical joke, push the edge of good taste and try to get yourself noticed by whatever means possible.

Keep it Short and Concise

In today's multitasking world, your potential viewers may only have a few seconds to check out your video and potentially be exposed to your business. Many of the most effective viral videos are between 15 and 45 seconds in length.

However you decide to produce your videos, keep it consistent. Strive to publish new videos on a regular basis and keep your content fresh and of high quality. If you set the bar high on your first few videos, make sure to keep up your high standards in subsequent releases!

When creating a video for your business, remember that you cannot create a viral video -- you can only create an awesome video and hope that it goes viral. Remember to take your time and explore every opportunity to be unique and give your video the best chance of generating millions of hits.

About the Author:  Anita Brady is the President of 123Print.com, one of the foremost suppliers of online business cards, and other office supply items for small businesses and individuals.