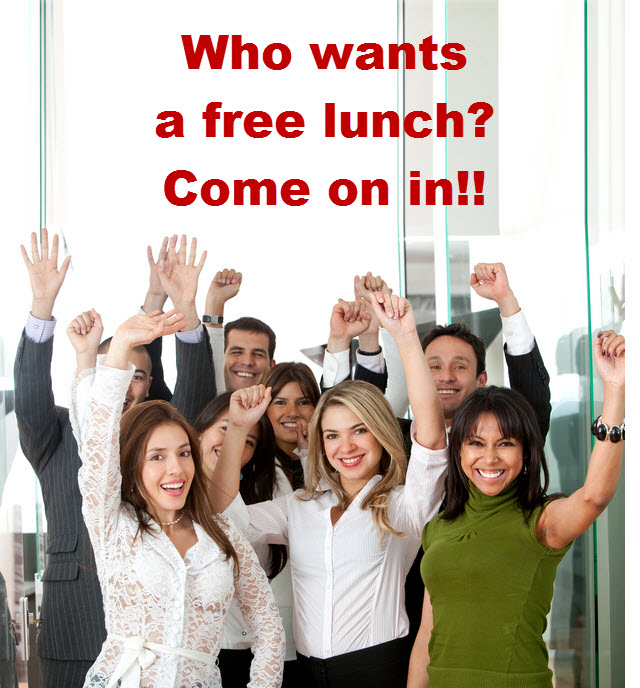 What does it take to make a profit in the restaurant business?  Is it possible to give away a free lunch and stay profitable?  How about 300 free lunches?  For many smaller restaurants, it is believed there is no such thing as a “free lunch” and every transaction must be profitable.  It is a stretch to believe that having a drawing where 300 people win “the prize” of a free lunch will help business enough to make it pay and yet this has been done successfully.

Here is a true story about how I turned an empty restaurant into a full restaurant and added to sales and the bottom line by the end of the month:

So, I am the new restaurant owner looking at the very full fish bowl with business cards overflowing.  As I pointed to the fishbowl I asked:  “Who draws the business card and how are the winners notified?”  Even though the sign said: “Winner every week”, the team responded with a “We have never had a drawing and no one remembers ever seeing a procedure for notifying the winner.”

I had just purchased the restaurant and each day looked at the empty dining room during lunch.  We had a salad bar and lunch buffet which made food cost very high and it was so primarily because of waste.  It became very easy to make the next decision.

Every person who had dropped the card into the fish bowl with the hope of winning a free lunch was sent a letter.  “You have won a free lunch!” was at the top of the letter.  “Please bring in this letter” was included in the letter and of course I was sure to say; “Be sure to ask for me when you come in to claim your prize.  I would love to meet and connect with you.”

We mailed the 300 letters to the “winners” over 3 days, 100 each day.  I signed each one personally and when I recognized a name or business, I added a special note at the bottom.

Those who received the winner announcements began to come in one by one.  People who had dropped their card in six months before and never returned decided that the letter was inviting enough to accept the invitation.  75% of those returning with the “winner notification” did not dine alone.  They had invited at least one friend or business associate.

Knowing that many strangers would soon be arriving, I had prepared the staff with a huddle each day and outlined how we would create a memorable experience.  It was important not to miss ANYONE.  I shook EVERY hand, made an introduction and said a big congratulations for being a winner.

I told no one that I had sent everyone who had dropped a business card in the fish bowl a winning notification.  It didn’t matter much.  In their mind, they were a winner.

The restaurant went from being empty for lunch to a buzzing crowd.  Connecting with guests in the dining room was easy to do.  There were big smiles all around.  People went from stranger to acquainted as they responded by bringing in their personalized letter.  I also met people who became long term friends, collaborators, and forever customers.

The costs for the week were marginally higher as those who accompanied the winner paid full price and there was almost no waste from “old product”.  Labor costs improved with the added sales and since we were going from an empty restaurant, there was not a need to add staff.

Larger restaurant companies do not appreciate such a tactic.  When guests respond to such a letter, the management team must have the very best execution and key leaders need to personally recognize the winners to make an invitation of “please come back!”  If there is any doubt that a management team will falter and not have the ability to keep up, what restaurant company will risk taking such a chance?  The “win a free lunch” en masse will backfire as the costs do not turn into future sales.  It is imperative to have a personalized greeting as each winner arrives.  (Warning:  As they arrive, many will be thinking that something is up or that there is a catch.)  There is of course no catch.  It is about creating more connections and more celebrations.

This is one of hundreds of stories I get to share each week.  It is a reminder of doing the right thing, keeping it personal, being available, and inviting people back with a hand shake.  It is a perfect moment to consider the value of a customer who will spend thousands of dollars in the future.

If you were in my shoes, would you have taken the risk and sent every person who had dropped a business card in the fish bowl a letter saying “you are the winner”?   If you knew that the fish bowl had sat for a year without a single winner, would that have motivated you to “make things right” and do exactly as I did?

After doing the numbers, we were way ahead.  So were the guests who visited us as we gave outstanding service and "five minute bites".  By the end of the month food cost and labor costs were improved and sales were up.  You should know, I love numbers and some thought I was a walking calculator.  I did not ignore the numbers when I signed those winning letters. I just know managing numbers gets easier when sales double.  Mantra: Focus on doubling sales.

We had a 60% response rate from the letters and I always wondered how many others kept it handy for their special day.  Many did visit for lunch and say "I forgot my letter, I will bring it next time."  They were happy to pay full price knowing they still had the letter to get the lunch free.

Thinking of creating a profit in the restaurant business by profiting from each transaction limits the possibilities.  Restaurateurs need hundreds (thousands) of people talking about their restaurant on a daily basis to create success.  What are the options to make that happen?

When was the last time you told somebody they were the winner, handed out a prize and made the guest feel as if they just won the lottery?  Maybe today is the day.