Step by Step YouTube Video Marketing by the Numbers to get 1.2 Million Views

If you believe in the hyped up Internet marketers, you will buy off on the idea that YouTube video marketing is the magic marketing formula for everyone to use.  As you look at the absolutely terrible videos on Youtube and the minuscule number of viewers, "why bother" may be your response. 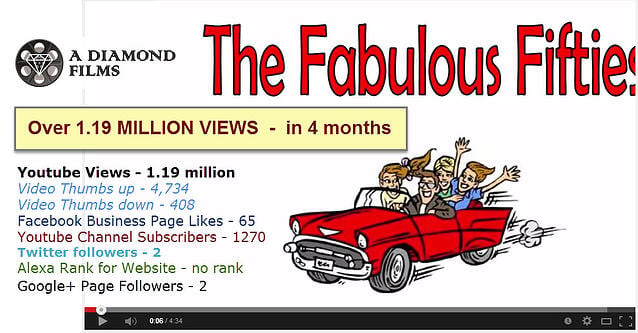 Let's take a look at a random example of someone relatively new to Youtube and social media to understand how a million plus views translates into website visits, likes and follows.

Posted first video on YouTube.  About student/youth protests in the 60's. To date it has 1,195 vews.  Jason says "Great video dad!" (Excellent Jason)

A Diamond Films registered their domain name with Namecheap.com and set up a free blog on Blogger.  Videos found on Youtube are also posted in the blogs.

Posted their third video: "Lost in the Fifties- Another Time, Another Place" - Currently with 1.19+ million views.

Posted fourth video about the pop icons, celebrities and social culture of the 60's.

Alexa Rank for Website - no rank (relates to traffic)

What we don't know:

We can't be sure how many phone calls, emails or contacts A. Diamond has received since posting the videos or creating the website.

How much did it cost? (Almost FREE)

The only obvious cost was the domain name.

(I am unsure of where the images or music were acquired. I assume the images are from public domain websites.)

Creating a video slideshow is fairly easy.  Windows MovieMaker is free and may already be on your computer.  Apple has iMovie for MAC users.  Both have a small learning curve as does all software.  Free software does mean instant skill.

Who is A. Diamond Films?

I do not know A. Diamond or anyone related to the company.  It came across my desk because a friend said "This moved me and I thought you would like to see it."

My friend is 80 years old.  The topic of the million plus viewers video is about the 50's and I have to believe viewers are older.  This says "YouTube and social media is not limited to the young".

It was important enough to my friend to share, so I watched it.

The story behind the entrepreneurial mind of A. Diamond Films may be similar to yours... so I share it with you as well.

I know you are itching to watch the video.  Here it is:

Everyone starts at zero.  Small business, non-profits and big businesses all have the same goose-egg at the beginning.  Whether heard from a boss or from your own critical thinking, "get more attention" is a primary step towards growing business.  "Use social media" is on the lips of every professed social media expert.  Fear of moving from zero only to plateau at ten may be real... but leave that thought in the dust.

A. Diamond Films invested time and resources into creating a story and then used social media (YouTube) to share the story.  Seven months later, 1.19 million views (and growing).  If you had over a million views on YouTube, how would that change your conversations?

There are not as many videos with over one million views as you may believe.

Overcoming the odds even once will go a long ways.

It becomes important to have offers and calls-to-action for people to get more value by making more commitment.

1)  Understand that a million views on your YouTube channel does not necessarily carry over to other social media or a website.

3)  Start three social media accounts to share the story.  Which you choose depends on your audience.

4)  Identify your story (Or stories).  Document the stories with photos and/or video.

3)  Use presentation software to make a video. (With passion, purpose and a point.)

5)  Upload the video to YouTube. (Hopefully it tough both heart and mind)

6)  Add a CTA link over top the video on YouTube.

8)  Cross your fingers and hope that the video resonates with viewers who are inspired and compelled to share.

9)  Make introductions and invitation each and every day to make an impact.

10)  Follow A Diamond Films.  The links are above in the article.  Give them a thumbs up as they "dance with fear", blaze new trails to make an impact on the community.

So many amazing people invest their time and effort above and beyond expectations and remain humble along the way.  Many hope for more help or cooperation but are not quite sure of how to inspire people to say "yes, I will be involved".

The camera in a smart phone may provide an opportunity if someone would be willing to snap photos or record videos along the way.

Where to go for more serious videos?

I have two choices for you:

Dani at Pixel Dust Productions will rock your world.

Terry at TVision.tv has services that will change your website from a vending machine look to be engaging and personal.

You could make your own video I suppose... but if you are serious, you will at the very least call either Dani or Terry to start a conversation about the possibilities.  Let them know I sent you.