Teen Invents Flashlight That Lights From Body Heat. It Could Change the World 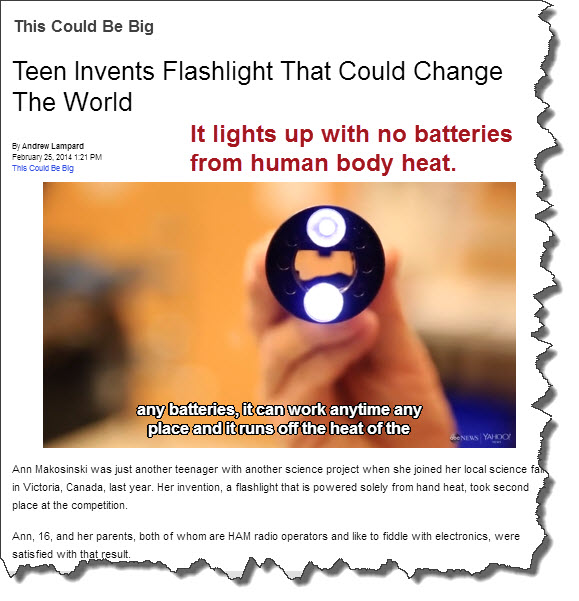 Ann Makosinkski is 16 years ald and about to change the world.  She has just invented a flashlight that is powered completely from body heat.  She did not win first place at the science fair competition.  You have to wonder what science project was in first place.

Is this the first step in many where portable devices will be powered by body heat?  Will the battery companies begin doing research to prove that it is dangerous to humans?

Ann realized that the warmth generated by the human body was an overlooked energy source.

Her project objective was to create a flashlight that ran solely off the heat of the hand.

That objective was accomplished when she discovered Peltier tiles, which produce electricity when one side of the tile is heated and the other is cooled.

Makosinski realized she could use these tiles to create energy for her flashlight if she left the device hollow.

Holding the flashlight on the outside would cause the tiles to heat up on one side while the ambient air would cool down the tile on the inside of the flashlight.

Since winning the Google Science Fair last year, Makosinski and her invention have received international attention. The Grade 11 student at St. Michaels University School in Victoria was named one of Time magazine’s 30 under 30 for 2013 and has given two TED Talks.

Ann will tell you about her invention herself in detail:

Of course Ann makes it sound simple but the technical details are beyond my scope.  This is a reminder that everyone has genius inside them.  How do you spark that genius?

Take the advice from Seahawk Derrick Coleman (who is deaf and went to the Super Bowl) here.

Listen to Zig Ziglar in the video here as he advises a lady "get ready to be fired".

Understand your skills and talents.  Find a list here.

Be a part of or start a mastermind group as it is described here.

Know what you believe.

Make meaning of your company.  Guy Kawasaki tells you how.

Ann may or may not have told others: "I am going to invent a flashlight that needs no batteries and is powered by body heat."  The thought of doing so seems too incredulous.  She was inspired by her family and friends in the Phillipines and she used the knowledge she received from her parents.

Take an inventory of your skills and talents, your special genius.  What do you believe?  What is your idea that seems just a bit incredulous?  As Jeff Bezos says:  "It is Always Day #1"

Are you ready to buy a Hollow Flashlight?  How many will you buy to ship off to a place where hardship exists and no electricity?